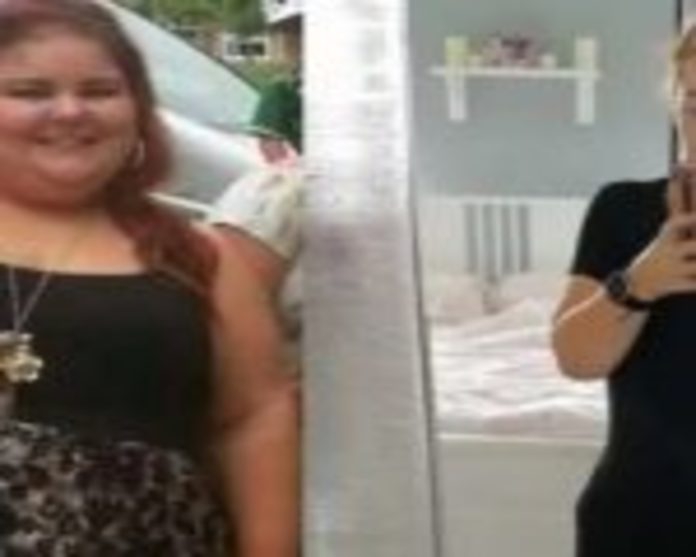 A woman, who has been clinically obese since she was six years old, has lost 69.8kg in time to celebrate her 30th birthday.

Leanne Kendellen, 30, from Dublin, dropped from 137.4kg to a healthy 66.6kg, and shrunk from a size 28 to a size 10, after totally changing her diet and undergoing gastric bypass surgery.

Kendellen first began struggling with her weight at just six years old and had been obese ever since, but her approaching milestone birthday inspired the mum-of-two to overhaul her lifestyle, Yahoo Life reports.

“I knew I didn’t want to enter another decade hating my body,” she explains. I wanted to turn my life around and feel confident in time for turning 30.

“I felt disgusting and I hated myself. I couldn’t bear to look at myself in the mirror.”

Though Kendellen had been on the Health Service Executive – the public health care system in the Republic of Ireland – waiting list for weight loss surgery since 2015, she knew she needed to take action herself while she waited for an opportunity to have the procedure.

“In January last year, I tried to diet to try and shift some of the weight,” she explains.

After losing around 28.1kg within the first few months, Kendellen discovered that she was going to be able to have a gastric bypass in July, just in time for her 30th birthday in December that year.

“I was so happy that I was going to be able to make such a difference to my body and I wasn’t going to be spending my 30s being overweight like I had my whole life,” she says.

“Since undergoing my gastric bypass I have lost 70.7kg and I feel great.

“I haven’t been this small since I was aged eight, it’s incredible,” she enthused.

She says that her children couldn’t sit on her knee, they would be sitting on her belly, and she would get out of breath when she changed their nappies.

“Everything was hard for me when I was big. It hurt to walk, especially pushing a buggy while carrying over 133kg as well. It was awful.

“I didn’t want to be known as the fat mum when the kids went to school and I didn’t want them to be ashamed of me. It was a horrible way of life.

“I was embarrassed and thought that everyone was staring at me. It made me not want to leave the house most days and I avoided going to any family events because I didn’t want people to see me,” she says.

Of her old lifestyle, Kendellen describes constantly overeating and spend each day sitting on the sofa, only moving to eat and go to the bathroom.

“We would eat takeaways at least three times a week and my portion sizes were huge. I would make sandwiches with four slices of bread and I would snack on chocolate bars,” she recalls.

But after having the weight loss surgery, Kendellen focussed on her protein intake, making sure her meals and snacks are based around protein.

“After having my surgery, I had to focus on my protein intake; so I now make sure my meals and snacks are based on protein.

“I was so determined to start losing weight, but I am not sure how far I would have got without having the gastric bypass.

“In all honesty, I never expected I would lose this much weight.”

Kendellen is now able to run after her kids, play on the swings and even go to the beach without feeling ashamed of her size.

“I’m free from everything that used to hold me back,” she explains. “I don’t worry about what people will think of me now and I am more confident than I have ever been.

“Even in the sweltering heat I would have covered myself up in long sleeves and trousers, and this year I have been wearing shorts, vests and skirts for the first time since being a child.

“Sometimes my kids don’t even recognise me when we look back at old pictures.”

After spending the majority of her life hating the way she looks, Kendellen is now grateful to feel happy and healthy.

“I can enjoy my 30s with my kids and know that there isn’t anything that I am not going to be able to do.”

Leanne Kendellen shares her ‘before’ and ‘after’ dietary habits:

Lunch: Crackers with a Babybel