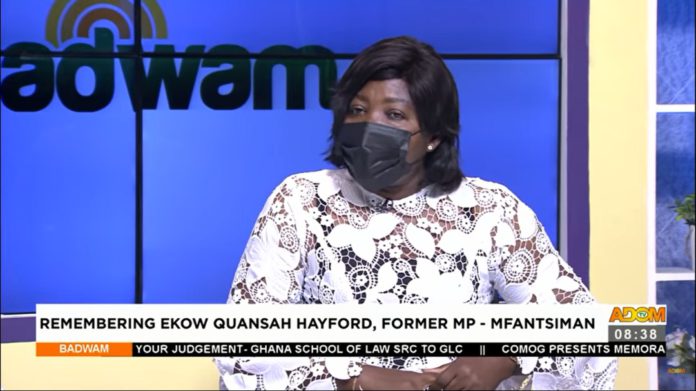 Member of Parliament (MP) for Mfantseman, Ophelia Hayford, who succeeded her slain husband, Ekow Quansah Hayford, has opened up on their last conversation prior to his death.

According to her, the late MP had been away for about three weeks for campaign activities in the build-up to the 2020 election.

However, they communicated often for him to update her on the progress of the campaign while she also shared stories from work.

On the day of his death, the ex-police officer noted Mr Hayford called at about 6:00 pm, a few minutes after she had returned from work.

“I sounded dull as we spoke on the phone because I wasn’t too well but to him, it was because I had missed him and that was perhaps my way of getting him to come back home.

“So he assured me that he was going to come back home later that evening because they were left with Dominase and one other place to go,” she recounted on Adom TV’s Badwam show, in commemoration of his one-year anniversary.

Overwhelmed with excitement, Madam Hayford said she could not keep the news to herself so she broke it to their children.

She explained she was so convinced her husband was going to come home that night due to a particular statement he made during their phone conversation.

“He kept saying we shouldn’t open the dogs that night so I was so sure he was going to come home.

“I was sleepy so I went to bed and told the children to call me when he comes but they never did,” she narrated.

“I woke up at 12 midnight to go and urinate and also say my prayers but there was still no sign of him within the period. I the same time, I heard my phone ring and it was a call from the party Chairman.

“I didn’t want to pick because I was wondering why he was calling at such an odd hour but when I did, that was when the news of their attack was broken to me. It was really hard for me to believe so I insisted they rush him to the hospital but I was told my husband was gone.”

Mr Hayford was shot by persons believed to be highway robbers in the early hours of October 9, 2020, on the Abeadze Dominase – Abeadze Duadzi – Mankessim Road on his return from a campaign trip.

Reports say he was shot by the armed men after which he was rushed to the emergency ward of Saltpond Municipal hospital where he was pronounced dead.

He was the New Patriotic Party’s Parliamentary Candidate in the Mfantseman Constituency for the 2020 election until his untimely death.