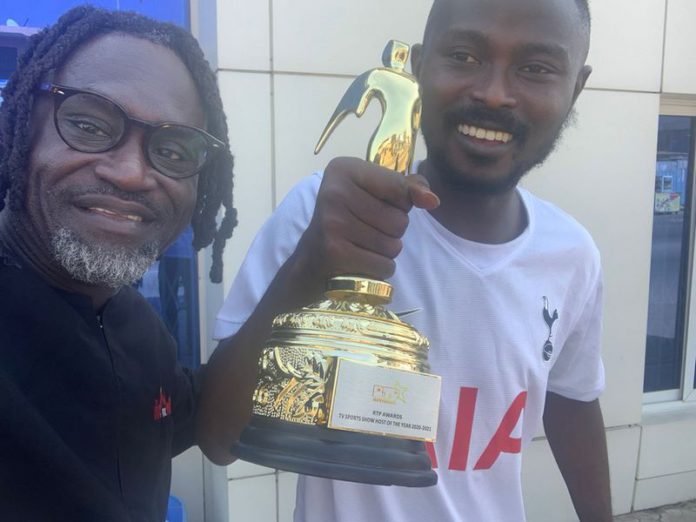 Award winning sports presenter, Patrick Osei Agyemang, popularly known as Countryman Songo, has set a record by winning awards in both Ghana and the United States of America (USA) at the same time.

On Saturday, November 6, 2021, the versatile host of Adom TV’s award-winning show, ‘Fire-for-Fire’ was honoured at the 3G Awards in the USA and was also adjudged the TV Sports Show of the Year for 2020/2021 at the Radio and Television Personality (RTP) awards.

Songo has over the years won these awards back-to-back making him a force to be reckoned with in the sports fraternity.

This feat chalked by Countryman Songo is to recorgnise his dedication to sports development in Ghana.

The 3G Awards 2021 was held at the Best Western Plus Robert Treat Hotel in the USA. The 3G is initials for God, Global & Giving. The event is dubbed; ‘A Night of Heroes’. It recognises the sacrifice and dedication of the leading trailblazers of the greater Ghanaian/African and Global communities.

Due to his commitment and hard work, he has won so many awards which include: Best English Commentator, National Sports Journalist Awards and Sports Commentator in 2005, TV Host of the Year.

Countryman Songo has provided commentaries for almost all the big clubs in Ghana and the national teams both local and international.

An elated Patrick Osei Agyeman said the recognition will propel him to give off is best.