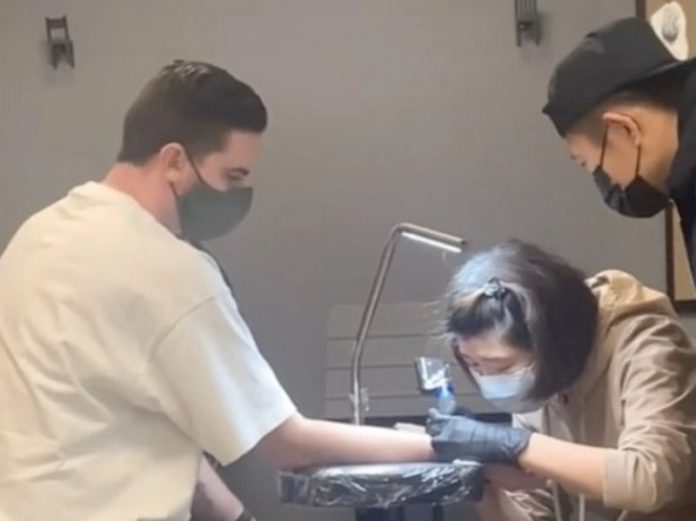 A woman convinced her boyfriend to get her name tattooed on his arm – before telling him she knew he was cheating.

A TikTok user called Lana revealed she made her ex get inked before she ghosted him immediately after.

She booked him in after discovering he had done the dirty with another woman. The next day she ignored his calls and texts – and called a halt to their relationship.

She posted a video of the tattooing on her account last week and received a mixed reaction from her followers after telling them about her plan.

“When ur POS ex wants u back so u tell him to get ur name tatted on him but plan on ghosting him immediately afterwards,” Lana captioned the video, which has been viewed 1.4 million times on the platform.

She was described as “evil” for making her “cheating” ex-boyfriend get her name tattooed on his arm ( Image: TikTok / @lanalovelace7)

Daniela Carreola, the woman claiming to be the man’s current girlfriend, responded in the comments.

“This tattoo was done March of 2021 before we even met. I make fun of him for it, yes, but people get tattoos of names all the time,” she wrote.

Some says Lana served up the perfect justice, but others said she went too far and should have just kicked him the curb.

“That’s just wrong no matter what the circumstance is,” one wrote.

Another commented: “This is so evil. But I LOVE IT.”

It’s not the only example of a woman scorned taking serious revenge to get even after having her heart broken.

Jade Purvis shared the story of how she ended up marrying his mistress’ boyfriend on TikTok, where she’s known as @jadepurvis53.

In a clip that has been viewed more than 6 million times on the social media platform, Jade explained that she was in a relationship with her boyfriend for three years and was even engaged to be married when she claims he travelled 188 miles to cheat on her with a girl he met on Facebook.

Jade, from Ayrshire in Scotland, also claims the woman in question was also cheating on her own boyfriend who she’d been with for more than five years.

Understandably, both parties were gutted when they found out and decided to meet up.

Jade says: “Her boyfriend and I decided to get our own revenge. He drove 188 miles to see me.

“He’s not left. This was seven years ago, four years married. I think we win.”