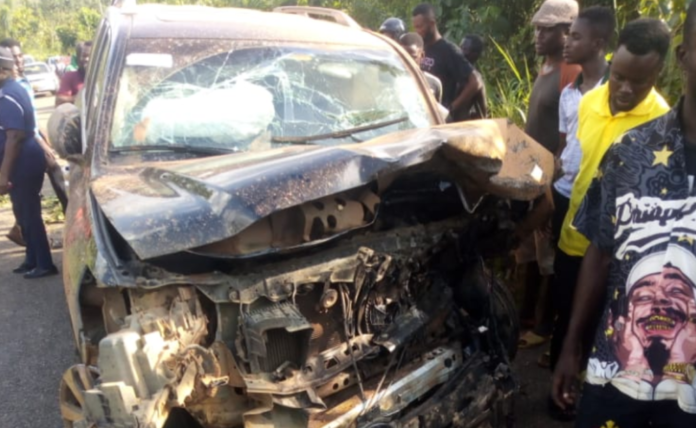 The headteacher of Sekyikrom D/A school in the Denkyembour District of the Eastern Region has died in an accident on Wednesday, November 17, 2021.

The deceased, identified only as Mr Ayabeng, was driving a Corolla with registration number GB 5622-12 from Boadua, a suburb of Akwatia heading towards Akyem Topremang.

However, he crashed head-on with a vehicle with registration number GM 520-19 driven by a popular gold dealer, Twum Barima, who was from the opposite direction.

His body was extricated from his mangled car and sent to the St. Dominic Hospital Morgue.

The suspect driver was nowhere to be found after the crash.

The gold dealer was allegedly speeding while negotiating a curve.

In a related development, the lifeless body of a female has been found at Asokore, a suburb of Koforidua in the Eastern Regional capital.

The decomposing body of the yet-to-be-identified young woman was detected by residents and passersby along the Kasadjan highway stretch towards the Oyoko roundabout on Wednesday, November 17, 2021.

Police have since retrieved the body and deposited it at the morgue.

The cause of death is not known, however, some witnesses suspect foul play.

Another female teenager has also been found dead in an incompleted building in Sofokyere in Berekum East in Bono Region.

Her body has been retrieved by Police and deposited at the morgue while investigations continue.