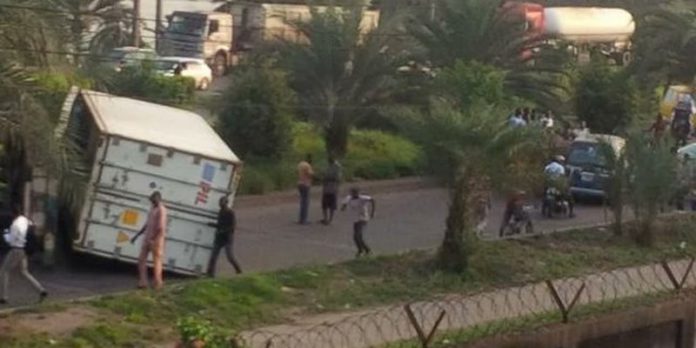 The Federal Road Safety Corps at Anambra said an accident involving two vehicles at Amansea junction, by Awka-Enugu Expressway, claimed the life of a female passenger on Thursday night.

The Sector Commander of the corps, Mr Adeoye Irelewuyi, confirmed the accident to the News Agency of Nigeria in Awka, on Friday.

Irelewuyi said the accident could be attributed to a bad road in the area.

“Eyewitness report indicates that the truck driver was carrying a container heading to Enugu, while the commercial bus driver was heading towards Awka.

“Due to the bad road along that area, the truck was not stable and the container fell on the bus and crashed it.

“Seven persons were involved in the crash – six male adults and one female adult. Five passengers inside the bus sustained injuries.

“The female passenger was confirmed dead by the doctor on duty at Chukwuemeka Odumegwu Ojukwu University Teaching Hospital, Amaku, Awka, and her body deposited at the hospital morgue,” he said.

While condoling with the family of the dead, the Sector Commander said that a road audit had been carried out on the Amansea road and forwarded to the appropriate quarters for government to act on it.